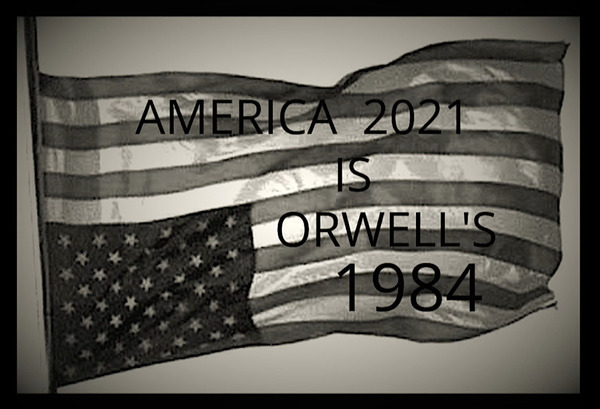 US FLAG UPSIDEDOWN by A.J. SMUSKIEWICZ is licensed under N/A N/A
The power-mad authoritarian government and its corrupt allies throughout society, the use of fear to control, the never-ending lies and propaganda, the twisting of language, insanity masquerading as sanity, the erasure of history and the destruction of logic, and the obedient brainwashed sheep clones that make up the population... Yes indeed, the United States of America in 2021 certainly seems to be the dark upside-down society predicted by George Orwell in his 1949 novel 1984.

Just read the words in the 1984 excerpts below. It is uncanny and amazing how all of these quotes apply so well to what is going on these days—especially since the racial riots and toppling of statues, the manufactured pandemic hysteria, the unprecedented power grabs by government at all levels, the fraudulent presidential election, the Big Tech censorship, and the beginning of the Big Brother (or Big Sister? or Big Genderless Person?) regime of Biden and his controllers.

You can also listen to these excerpts from 1984, as read in this video, accompanied by appropriately somber organ notes:
https://www.youtube.com/watch?v=pv6kcsZZauA


Big Brother is Watching You.

War is peace. Freedom is slavery. Ignorance is strength.

If you want a picture of the future, imagine a boot stamping on a human face—forever.

But if thought corrupts language, language can also corrupt thought.

If all others accepted the lie which the Party imposed—if all records told the same tale—then the lie passed into history and became truth.

The Party seeks power entirely for its own sake. We are not interested in the good of others; we are interested solely in power, pure power.

Power is in tearing human minds to pieces and putting them together again in new shapes of your own choosing.

Perhaps a lunatic was simply a minority of one.

There was truth and there was untruth, and if you clung to the truth even against the whole world, you were not mad.

Freedom is the freedom to say that two plus two make four. If that is granted, all else follows.

How do we know that two and two make four? Or that the force of gravity works? Or that the past is unchangeable? If both the past and the external world exist only in the mind, and if the mind itself is controllable – what then?

Orthodoxy means not thinking—not needing to think. Orthodoxy is unconsciousness.

We do not merely destroy our enemies; we change them.

Every record has been destroyed or falsified, every book rewritten, every picture has been repainted, every statue and street building has been renamed, every date has been altered. And the process is continuing day by day and minute by minute. History has stopped. Nothing exists except an endless present in which the Party is always right.

Don’t you see that the whole aim of Newspeak is to narrow the range of thought? In the end, we shall make thoughtcrime literally impossible, because there will be no words in which to express it.

They could be made to accept the most flagrant violations of reality, because they never fully grasped the enormity of what was demanded of them, and were not sufficiently interested in public events to notice what was happening. By lack of understanding they remained sane. They simply swallowed everything.

To know and not to know, to be conscious of complete truthfulness while telling carefully constructed lies, to hold simultaneously two opinions which cancelled out … to use logic against logic, to repudiate morality while laying claim to it, to believe that democracy was impossible and that the Party was the guardian of democracy, to forget whatever it was necessary to forget, then to draw it back into memory again at the moment when it was needed, and then promptly to forget it again.

Stupidity was as necessary as intelligence.

How does one man assert his power over another? By making him suffer. Obedience is not enough. Unless he is suffering, how can you be sure that he is obeying your will and not his own? Power is in inflicting pain and humiliation.

Our new civilization is founded upon hatred. In our world, there will be no emotions except fear, rage, triumph, and self-abasement. Everything else we shall destroy—everything.

There will be no loyalty, except loyalty towards the Party.

When we are omnipotent, we shall have no more need of science.

The past was erased, the erasure was forgotten, the lie became the truth.

The Revolution will be complete when the language is perfect.

Your mind appeals to me. It resembles my own mind, except that you happen to be insane.

You must try harder. It is not easy to become sane.

He was a lonely ghost uttering a truth that nobody would ever hear.


WILL WE EVER GET OUT OF THIS 1984 NIGHTMARE, OR ARE WE ALREADY TOO FAR LOST IN THE DYSTOPIA?


US FLAG UPSIDEDOWN by A.J. SMUSKIEWICZ is licensed under N/A N/A
Tweets by Rachel Alexander