Strategies based on Epidemiologic Sciences: Why U.S. Covid Death Rates are Significantly Higher than in Korea and Sweden 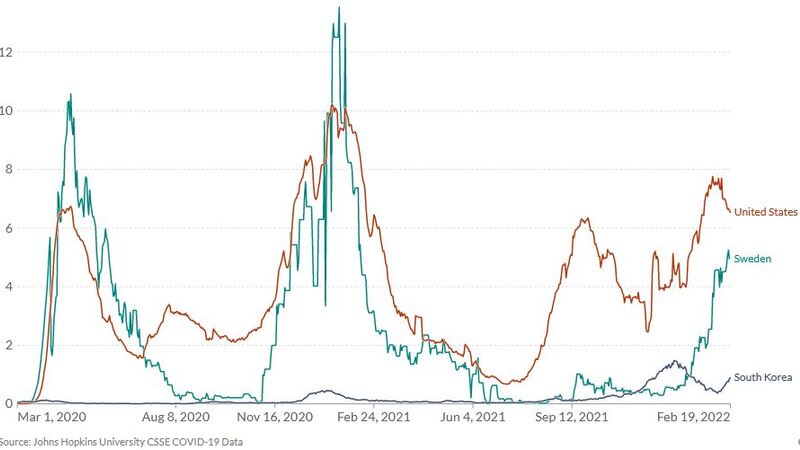 Our World In Data: COVID deaths as of 2/22/2022 by NA is licensed under ourworldindata.org Our World In Data
Strategies based on Epidemiologic Sciences:
Why U.S. Covid Death Rates are Significantly Higher than in Korea and Sweden
By: David R. Usher, Civitas Economic Engineering, [email protected]
Advised by Knut Wittkowski, Asdera LLC
Since the beginning of the pandemic, public statements of U.S. government officials and pharma executives have focused initially on distancing (lockdowns, masks, … ) and then on vaccines and vaccine mandates. With close to 800,000 covid deaths as of December, 2021, these strategies have clearly failed.

New waves of deaths indicate that vaccines had little, if any impact reducing neither infection nor death in 2021, compared to 2020 when no vaccines were available.

In Korea, policy was based on epidemiological science rather than experimental lockdowns. Sweden partially conformed. The United States violated many rules of epidemiology.

The differences in the proportion of people who died of covid in three countries applying different strategies since the beginning of the pandemic are striking (Statistics as of 12/11/2022): 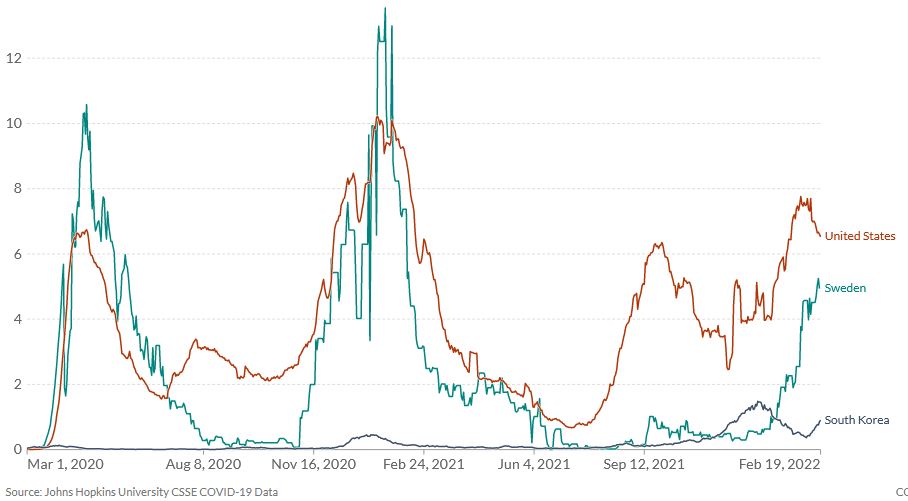 The United States COVID death rate since the beginning of the pandemic is 30.9 times higher than South Korea’s and 1.6 times higher than Sweden’s even though vaccination rates of these countries are between 60% and 80% -- a difference unlikely to be a significant factor affecting deaths (even if vaccines are assumed to be effective).

Public policy strategies predictably produced these three manifoldly different outcomes depending on conformance with the Three Rules of Epidemiology summarized by Knut Wittkowski in March, 2020 to translate complex epidemiologic methodology into simple standards for the general public, governors, and legislators to understand and scientifically apply establishing reasonable responses to respiratory virus disease epidemics.4.V1, 2020-03-31.

1.    Protect the vulnerable, who are at the highest risk of hospitalization, ICU utilization, and death to protect them and the health care system.
2.    Let the epidemic run its course to reach herd immunity among the young and healthy as fast as possible to reduce overall impact on society and economy.
3.    Only in the direst situations and for the shortest time possible should “flattening of the curve” by universal mitigation be considered to prevent imminent collapse of the health care system
Why South Korea’s Strategy Succeeded:
South Korea’s strategy was simple. They followed the three rules of epidemiology.  Korea’s low death rate was at least in part a result of locking down nursing homes, requiring all workers to live in the facility until the pandemic passed. They let the epidemic run its course to quickly develop herd immunity in the general population. They did contact tracing and then vaccinated 80.1% of the population to speed up the process and further reduce deaths.4 Otherwise, life was uninterrupted.

Their strategy was so successful that The Korean Academy of Medical Sciences report to the NIH found no excess deaths5 (deaths occurring as a consequence of the pandemic over and above the expected death rate).

Why Sweden Was Only Partially successful:

Sweden’s strategy was similar to Korea. Sweden allowed the infection to run its course, and vaccinated 69.7%4 of the population, a similar proportion as the US.  Sweden, however, violated epidemiological Rule #1. It did not lock down nursing homes to protect the vulnerable who are most at risk of dying of any respiratory disease virus. This caused thousands of unnecessary deaths of the elderly and infirm.

Why the United States became a disaster:

The United States violated all three Rules of Epidemiology by experimenting with lockdowns, social distancing, “close contact” orders in schools, masks (later) and other synthetic heroics. The opportunity to teach people with comorbidities (obesity, type-2 diabetes, cardiovascular diseases, … ) to reduce their risk through intermittent fasting, vitamin D3, and other interventions clinically proven to be safe and effective was missed. Policy did not focus on reducing death of high-risk individuals over the age of 65, but were counterproductively applied to everyone. Focusing on infection rates caused a pandemic of experimental counterproductive policies and scared the general population.

By the time lockdowns were issued in most states, the pandemic and hospital overloads had passed, with little impact reducing death. The opportunity to end the lockdowns after CDC Director Dr. Robert Redfield’s April 17, 2020, White House presentation 4.V5, 2020-04-29, Fig.18 was missed.

Since 2020, Vaccines were hoped for and then claimed to be the magic bullet.  Massive pressure was placed on everyone to buy into the strategy:
What must we do now?

Firstly: We must recognize the fact that current COVID-19 vaccines designed to target the early pre-Alpha variants became increasingly ineffective against the Delta and Omicron, which carried mutations evolved by natural selection against the  vaccines.

Secondly: We must recognize that vaccines are unlikely to ever become as effective against respiratory virus diseases like influenza and COVID as vaccines against the stable smallpox, polio, and measles viruses. Instead SARS-CoV-2 mutates far faster than the 6-9 months or it takes for a new mRNA vaccine to be approved and distributed.  By the time the vaccine hits the market, the virus it targets will the long gone. The tortoise never catches the hare either.

Thirdly: We should implement nutritional interventions to reduce the major risk factors for severe forms of COVID and other influenza-like illnesses, which are obesity, type 2 diabetes and cardiovascular diseases. This would achieve the results hoped from from vaccines.6

The only way to accomplish this quickly is for governors in both parties to issue emergency Executive Orders to protect residents by banning all vaccine and lockdown mandates from the federal government, local businesses and jurisdictions.

Democratically-elected leaders in each State need to take back control immediately. We cannot sue our way out of this political disaster in court.

Legislatures, who have lawful authority to define immunization policy have a lot of careful legislation to enact – which should not be done hastily.

Lockdowns must be limited to very short periods only when hospitals are near collapse, ban “close contact” orders, and to require weekly, if not daily “spit” testing of those who work with vulnerable patients to prevent transmission.